This past week marked 20 years since the Srebrenica massacre. More than 8,000 predominately Bosniak Muslims were killed by the Bosnian Serb Army under the command of Ratko Mladic (a war criminal currently on trial in the Hague). The context in which the horrors of the Srebrenica massacre occur may be traced partially to the the rise of Slobodan Milosevic in the mid-1980s, who purposefully fomented ethnic division among the Serbs in Bosnia, Croats, Bosniaks and Albanians in a means to mitigate growing disdain with Yugoslavia’s tenuous union. By 1991 Slovenia, Croatia and Macedonia all declared independence from a crumbling Yugoslavia, with fierce fighting erupting between Croats and Serbs in 1991-92. Bosnia and Herzegovina’s declaration of independence in 1992 (and its rejection by Bosnia Serbs who did not recognize the new Bosnian state) sparked the outbreak of the Bosnian War (1992-1995), creating a downward spiral of ethnic violence and war that would precipitate the heinous acts of genocide at Srebrenica in July (roughly July 11-16th) of 1995.

It is important to come to understand the ethnic composition of Bosnia in a means to comprehend the multi-ethnic state’s precarious position in placating the ethnic and religious interests in Bosnian politics. In Bosnia, Muslims would represent the single largest segment of the population by the early 1970s. An increasing amount of Serbs and Croats emigrated over the next two decades, and based on a 1991 population census Bosnia’s population of approximately 4 million was 44 percent Bosniak, 31 percent Serb, and 17 percent Croatian. The following map provides a more visual representation of the ethnic composition of Bosnia both before and after the war. 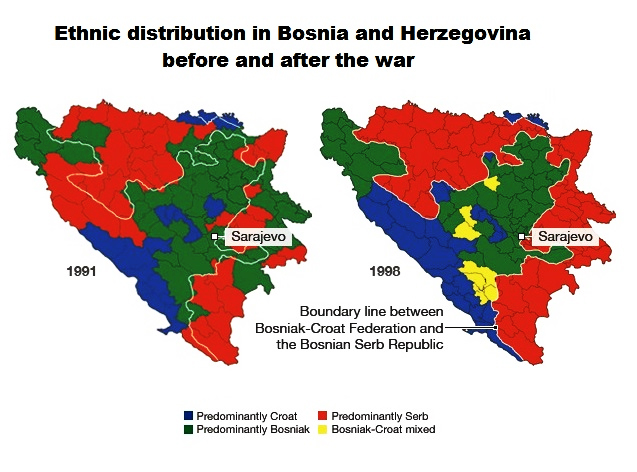 Map courtesy of the Office of the High Representative Reconstruction and Return Task Force RRTF Report March 1998: An Action Plan in support of the return of refugees and displaced persons in Bosnia and Herzegovina.

Following Bosnia’s declaration of independence in 1992, political representatives for Bosnian Serbs – after boycotting the referendum on independence – created their own state backed by Serbia. Supported by the Serbian government of Slobodan Milošević and the Yugoslav People’s Army (JNA), the JNA mobilized their forces inside the Republic of Bosnia and Herzegovina in order to secure Serbian territory (what was known as the Republika Srpska). The unfolding political chaos was multiplied after the United States and the European Community recognized Bosnia’s independence. Serb forces launched an aggressive offensive against Sarajevo and the Bosniak-dominated regions in eastern Bosnia. The JNA attack prompted hastily organized retaliatory and defensive counter-attacks by Bosnian forces (often backed by Croatia) to little affect against superior Serb forces. By the end of 1993 Serb forces were in control of almost three-quarters of Bosnian territory, wreaking havoc through the countryside by using rape, torture, forcible displacement and extrajudicial murder and executions. The perpetration of ethnic cleansing in Bosnia remains an unresolved chapter in the regions history; and is certainly perpetuated by continued Serbian resistance to recognizing its actions, and accepting that a genocide did indeed occur (I speak to this a little more at the end of the this post).

One of the most controversial aspects of the ongoing Bosnian War, and indeed the events that would come to be known as the Srebrenica massacre, was the role of the United Nations. While the UN refused to intervene with ground forces in the Bosnian conflict, humanitarian aid was provided to the tens of thousands who had been displaced or faced starvation. The UN established “safe zones” for fleeing civilians who required protection from advancing Serbian troops. In July of 1995 Serb forces overan the UN-designated safe zone in Srebrenica as Dutch peackeeping forces were prostrate to respond with any meaningful action (it is interesting to note that the Dutch government of Wim Kok was forced to resign after an internal report implicated Dutch forces in allowing the massacre of civilians). Serbian forces, having overwhelmed UN peacekeepers, subsequently began separating the Bosniak civilians at Srebrenica between men, women and girls; and either deporting them or sending them to a certain death. The men and boys who remained behind were killed immediately or transported to mass killing sites – many of which are still being discovered. Current estimates of the total number of Bosniaks killed by Serb forces at Srebrenica range from between 7,000 to more than 8,000. Over 1,000 bodies of missing relatives have still yet to be discovered and properly laid to rest. Justice has been elusive for many families.

I feel it is important to provide you with a step-by-step account and timeline of the massacre in Srebrenica. I have taken this particular excerpt from a PBS special entitled: Srebrenica: A Cry from the Grave (the link to this source is provided below). It is worth reading through the timeline which provides some sense of the complexities faced by UN peacekeeping forces, the unarmed populace, and advancing Serb forces emboldened by an increasingly weak international response to the unfolding events in Bosnia.

By August of 1995 Serbian forces continued to defy UN demands. NATO, supported by Bosnian and Croatian forces, commenced a three week bombing campaign against Serb military and strategic positions. Crippled by sanctions and NATO bombing, Serbian leader Slobodan Milosevic finally agreed to enter negotiations in October, 1995. Milosevic, Croatian President Franjo Tudjman, and Bosnian leader Alija Izetbegovic would meet in Dayton, Ohio to flesh out an agreement on a federalized Bosnia divided between a Croat-Bosniak federation and a Serb Republic. The Dayton agreement would be finalized in Paris in December of 1995, officially bringing an end to the Bosnian War. While the agreement brought a cessation to hostilities, ethnic division remained a paralyzing aspect of Bosnian politics.

The failure to protect what was supposedly an internationally protected ‘safe haven’ continue to haunt the United Nations and the Dutch forces that were sent to protect the enclave. Contextually, the Rwandan massacre only a year before Srebrenica put a strong spotlight on the failures of the UN and its mandate. If there is any constant in human history it is both our complacency to genocide and our ability to forget and suppress guilt or inaction. How often have we heard “never again.” A Bosnian government report in 2005 implicated almost 20,000 Bosnian Serbs who partook in wanton killing and destruction during the Bosnian War. Similarly a Dutch report in 2011 ruled that the Netherlands was indeed responsible for the deaths of a number of Bosniak men who had been forced out of one of the safe haven camps in Potočari. Furthermore, in July 2014 the Dutch government was found liable by a Dutch court for the deaths of more than 300 Bosniak men and boys at Srebrenica. Srebrenica however was a failure of an international system lacking the proper mechanisms to protect against genocide. The Dutch peacekeepers at Srebrenica are merely the tip a much larger iceberg.

This anniversary year for Srebrenica has been marred by a strong sense of justice denied for the family and survivors who witnessed and experienced the worst genocide in Europe since the Holocaust. The Pew Research Centre notes: “The worst atrocity to take place in Europe since World War II occurred during a brutal three-year war following the breakup of the former Yugoslavia. The war was fought largely along ethno-religious lines, among predominantly Orthodox Christian Serbs, Muslim Bosniaks and Catholic Croats.” Emotions are still strong among the nationalities of Bosnia. Serbia has issued a lukewarm apology for the crimes committed in Srebrenica, but consistently stopped short of using the term genocide. A recent UN resolution that would have labelled the Srebrenica massacre as genocide, was vetoed by Russia in the Security Council after heavy lobbying by Serbia. Wounds have not healed, and what I find most frustrating – indeed infuriating – is that we watched the needless killing of so many innocent lives and the destruction of so many families. We felt the need and moral responsibility to eventually intervene only when it was too late. The true tragedy is that we must continue to reflect on collective failures and human tragedies that could have been avoided. Europe and the world failed in July of 1995. At a time of commemoration we must also find space to examine the uncomfortable truths of the who, what, how, and when in our history. “Never again” must not become a catchphrase but a very real reference to a time of collective action to stop acts of genocide against so many innocent lives.

For more information about the Srebrenica massacre please consult the following sources:

The Atlantic – 20 Years Since the Srebrenica Massacre
http://www.theatlantic.com/photo/2015/07/20-years-since-the-srebrenica-massacre/398135/

PBS – Srebrenica: A Cry for the Grave
http://www.pbs.org/wnet/cryfromthegrave/massacre/massacre.html

RFERL – Here are the Face of Thousands who Died in Srebrenica
http://www.rferl.org/fullinfographics/infographics/27114531.html